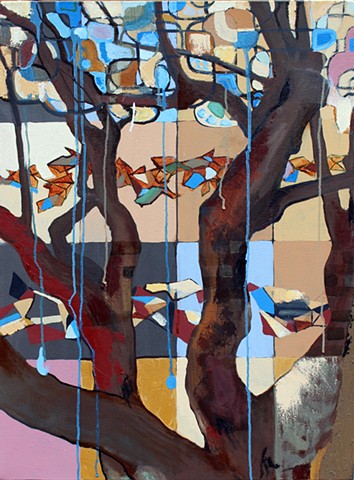 “Whenever the dullness of the profane is left behind, whenever life grew more intense, through honor or death, victory or sacrifice, marriage or prayer, initiation or possession, purification or mourning, anything and everything that stirred a person and demanded a meaning, the Greeks would celebrate with fluttering strips of wool. White or red for the most part, which they tied around their heads, or arms, or to a branch, the prow of a ship, a statue, an axe, a stone, a cooking pot. The modern eye encounters these strips everywhere, but doesn’t see them, removes them from the center of attention as mere decorative details, and hence insignificant. To the Greek eye, the opposite was the case: it was those light, fluttering strips of wool that generated meaning, gave it its boundaries, celebrated it. Everything that took place in the soft frame of those woolen strips was different and separate from the rest. What was it those woolen strips, those tassels represented? An excess, a flowing wake that attached itself to a being or a thing.

Isodore of Seville could still write, "Vittae dictae sunt, quod vinciant:" "The woolen ties are called so because they bind." But what was this bond? It was that momentary surfacing of a link in that invisible net which enfolds the world, which descends from heaven to earth, binding the two together and swaying in the breeze. Men wouldn't be able to bear seeing that net in its entirety all the time: they would get caught in it at once and suffocate. But every time someone achieves or is subjected to-but every achievement is subjection, and every subjection achievement-something that uplifts him and generates intensity and meaning, the woolen strips, the ties come out. At one end they are bound tight to the body in a knot that may become a noose. At the other they flutter in the air, keeping us company, escorting us, protecting us. The victorious athlete has woolen strips tied to his arms, his torso, his thighs, and they follow him, waving in the air like a triumphant tangle of snakes. Nike, Victory, always carries a bunch of woolen ties to hand out to her chosen favorites. And the initiate keeps the strip of wool he wore on the day of his initiation and preserves it as a relic his whole life long. But woolen strips were also hung from the horns of sacrificial bulls. The girls tied them there carefully before the ceremony, the way the bride's mother tied them around wedding torches of hawthorn wood, and relatives hung them from the dead man's bed.

All these woolen strips, these vain, winged tassels, were nerves of the nexus rerum, the connection of everything with everything else, which alone gives meaning to life. We live every moment of our lives swathed in those ties, white because white is the color the Olympians like, or red because blood ties us to death, or purple, yellow, and green. But we can't always see them, indeed we musn't, because then we would be paralyzed, trapped. We feel them blowing about us the minute something happens to dispel our apathy, and we become aware of being carried along on a stream that flows toward something unknown. And just sometimes, but very rarely, those ties twist and turn and weave around us, until one loose end becomes knotted to another. Then, very softly, they encompass us, they form a circle, which is the crown, perfection.

Heavy with nectar, Poros stretched out in Zeus's garden. He slept, but in his mind thought was thinking: "What is a garden? The ornate splendor of wealth." Then Aphrodite appeared among beings. She was the daughter of thought. Soon there would be many copies of Aphrodite everywhere. They were demons, each one accompanied with a different Eros, with his buzz of gadflies."